Only about two days ago we decided to get our comics online and already we signed up for multiple sites we do not even know what they are there for!
Okay, wordpress we get, we know what a blog is, myspace is understood, we know what wanting to have a lot of friends is when you actually do not have any, but comiclifestyle? Hm, a mixture of all of that? Not sure! But we signed up anyway!
Any platform that is willing to host unknown artists for no money at all, so that these people may get… Continue

Crossposted from the home site blog:

Probably should have posted about this sooner, been a bit slow on the up take last few weeks - broken ankle is almost 100% but I got into a slow groove waiting for it to heal.


So a bit of news, Jim is in busy with his new kid [congrats to Jim] so I'll be jumping on a buss to… Continue 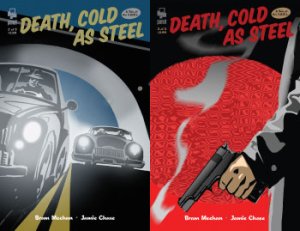 Norris is investigating the death of the indestructible man. There aren’t many…

Posted to SBC bulletin board a few days ago:

Sub-City comics has been in business for over thirteen years now and our customers have been very supportive of small press and independent, creator owned projects.

With this in mind, and having seen some of the wonderful work on display at SilverBulletComics I would like to invite anybody who creates their own books to send us a sample copy which we will take under review and if we feel your project would be of interest to our… Continue

I'm helping put together this list of events for the Stumptown Comic Fest. Of special note is the CBLDF benefit on Friday and the TMCM opera panel on Saturday.

Stick with us while we sort some remaining tweaks. This is a big tent, all are welcome.
Our rules are extremely simple:
http://www.comicslifestyle.com/forum/topic/show?id=864783%3ATopic%3A19

I have added linky links to the right hand sidebar and it feels good...
Those dern Google ads are the price we pay for having all these bells and whistles. If I pay $20 a month I can remove them... 'Hasbro action figures' or 'Transformers' merch are not exactly what this site is about...

The main 'front page' blog has been shifted over to http://blog.comicslifestyle.com. (Thanks to my Lao - based webwonk pal for sorting… Continue

greetings
I taught a comic workshop to a group of adults today in St Kilda.
Was a real challenge to explain 'what is a comic' and
how does one translate a written piece into a comic story.
I liked it though. Made me realise that a lot of what I do
is instinctive.And to break it down was a real challenge.
I get a lot of teaching resources from
the National Association of Comics Art Educators.(on the net)
would LOVE to get feedback from other cartoonists… Continue

Zines in the paper! I've neglected this blog, but I'm known for neglecting blogs. This month has been really hectic in the world of small press. A fortnight ago was the Penrith Regional Gallery zine fair, a month ago the launch of the Zine Factory exhibition at said gallery(featuring the work of myself and Leigh Rigozzi as well as a group show). Last night was the Sydney Uni Verge festival zine fair, and in a couple of… Continue

Let's talk about Komik, but in bahasa indonesia, because my english not very good.

and I don't know what you mind are NING?
does somebody explain me about NING? ...

So I've started podcasting the comic reviews I've been doing for RRR's Aural Text over the last couple of years. First cab off the rank is a review of Gestalt Comics's Character Sketches: Trauma and Joy…

Registrations are now being accepted for the ninth triennial Festival of Cartoon Art organized by the Ohio State University Cartoon Research
Library. Attendees will enjoy presentations by top cartoonists from
around the country and the world focusing on the art of graphic
storytelling. Registration is $150 (only $25 for students and seniors
65 and over!) and includes admission to all Festival of… Continue

Taken from an email written by the super cute Maddy.

You might have already been contacted by some people for the following
events, but I thought I'd package it all together for you, as these
three amazing zine fairs are all happening in September! So get your
photocopiers, glue and staplers ready, September is going to be the
Month of the Zine Fair.

Rude Boy is a character who exists because of a font. Specifically the webdings clipart font that's standard on most computers. Each letter's a picture, and for some reason (most likely the amusement of the font's designers) the capital M in this font set is what can only be described as a hovering silhouette of a rude boy in the style of the Two Tone ska record label logo.

So I made a comic about him, using only the icons from the font, and the occasional vector-drawn prop.…
Continue In other news, stalk my flickr or sporadically updated blarg.

Example of my comics work.

is out! more info via bradbury [at] paradise [dot] net [dot] nz.

I don't have time to write much. I really ought to turn off the computer and draw some comics. You too? I stumbled out of bed today, unshaven, in search of noodles. On the way hit the newsstand. Then did a double-take.…

Don't let a fly spoil your chances of getting re-elected! (Stay tuned for MORE)
Oct 8
0 Comments