Russell Willis produced and published a number of important underground cartoon magazines in the 1980s.He moved to Tokyo in the early 1990’s where he now runs a web based publishing company in Tokyo. I recently met up with Russell in Tokyo where we talked about Russell’s involvement with the UK comics underground two and a half decades ago 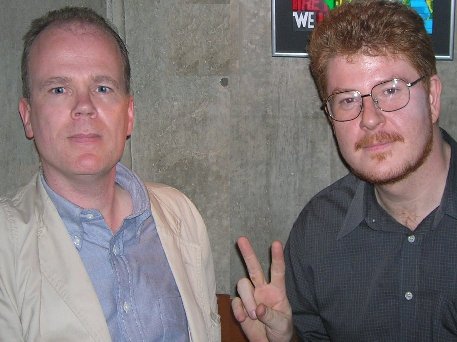 Russell, I met you back in 1985 at the Portobello Projects Cartoon
Workshop in West London. You'd come down for the evening to meet us all but
I can't remember what for exactly?

At that time, I was hoping to expand Infinity to include features and news on all sorts of cool comics-related projects -- so this was most likely a news gathering operation! At the same time I was publishing The Alternative Headmaster's Bulleting with SMS (taken over from Gerald Midgely) and had put out No Frills Funnies, an underground comic that later attracted the interest of Rip Off Press -- so I was probably looking for contributors too.

I remember that evening that you had brought with you a copy of the
truly excellent 'Infinity' magazine. For the unenlightened what was
'Infinity' and what was your involvement?

Infinity was different from most comics fanzines at the time in that it was dedicated to non-superhero comics. It was inspired by the work of Eddie Campbell and the Fast Fiction table, along with things such as Raymond Briggs' When the Wind Blows. The idea was that there was a whole world of comics outside of the X-Men and Infinity would use a bit of "positive discrimination" to explore that world.

How long did Infinity run for and what was the print run?

8 issues were published along with a couple of "mini-Infinitys" between December 1983 and sometime in the first half of 1985 -- I forget exactly and have no records! The first issue was 40 copies, photocopied then stapled on the steps of Central Hall where the Westminster Comic Marts took place. I met a brash, young Warren Ellis stapling on those steps. Copies went on the Fast Fiction table, but I sold most of them accosting people in the hall and badgering them into buying a copy.

The second issue had a 200 print run. By the third issue Virgin Megastores were selling them (I would trudge around London with a huge suitcase and go to every comic, record and "alternative" shop I could find and get them to stock copies). The last issue had a print-run of 800, which wasn't bad for a small fanzine that didn't cover superheroes.

For a small press publication Infinity had high production values.
The covers were glossy, last issue had a two colour cover and the inside
pages were properly printed, not photocopied. You also had a high print run.
How could you afford this? High production values? Perhaps relative to some of the really badly photocopied stuff! At the time I was publishing a tourist guide twice a year for Broadstairs where I lived. This (and the DHSS) provided enough cash to publish Infinity -- though by the last issue, I was breaking even. I started Infinity when I was 15 and was still living at home -- by issue 8 I was 17 and was living with bunch of hippies and anarchists.

Were you involved in any other small press projects at this time?

You had some pretty important contributors and interviewees. Remind
me who they were and how you managed this.

Alan Moore, David Lloyd, Posy Simmonds, Eddie Campbell, Hunt Emerson, Myra Hancock and more...a great list. A chap called Dixie, who helped me with the layout of issues 2~5, was a member of the Society of Strip Illustrators and helped me secure an interview with David Lloyd. Paul Gravett got me the interview with Posy Simmonds. I would solicit articles (such as an early one on underground comics from someone who hated them -- I knew that would generate controversy) and give editorial direction as to the angle I wanted, which I don't think was common for fanzines at the time. I was a pest and badgered people whose talents I respected for contributions. All of this led to quite a high quality for the time -- and because of the "no superheroes" policy I think people wanted to be associated with something that was a bit forward-looking. Also, at the time, you could meet comics creators at the comic marts. I drank beers with Alan Moore and David Lloyd et al in the Westminster Arms (although I don't think they knew I was 17). I'd later tell them they'd promised me stuff over beers... Just kidding!

In the early to mid 80's there seemed to be a lot of creativity and
hope in the underground comics scene and also a New Wave of underground
cartoonists. Would you agree and if so what do you think was the catalyst
for this change?

Absolutely. It was an amazingly creative time. In the UK you had Fast Fiction and Escape -- Paul Gravett, Eddie Campbell, Phil Elliott et al --, with Warrior really showcasing Moore and Lloyd and Davis. and in the US you had RAW and Maus (being serialized at the time) and a whole bunch of mainstream stuff which wasn't superheroes. Fast Fiction especially gave a real outlet to photocopied and small print-run stuff, and I this must have been inspiring to a lot of artists and writers who are well-known today. Warren Ellis talks about it often.

Catalyst? I don't know, but the above kept the flame burning.

You suddenly stopped producing Infinity in 1985 and your other
projects, 'Mad Dog' and 'The Alternative Headmaster's Bulletin came to an
end. Why, so suddenly, when you seemed to be riding the crest of the wave?

I was ripped off by a guy with whom I'd set up a studio and a bank account to publish Infinity and other projects. Ironically, I found out the day I received a cheque from Rip Off Press for an order of hundreds of copies of No Frills Funnies. I went to deposit the cheque and found out that all the money had gone, a big overdraft had been run up and that the guy had done a runner and disappeared with nearly all the artwork and contact addresses for the comics projects we were planning. I still remember the stunning Dan Maniac cover to No Frills Funnies #2 by the late Mike Matthews. I'll never see it again.

All of this just made me so depressed that I just froze and dropped out of the scene. Fortunately, I kept most of the contributions for Infinity #9 at my home. I’ll tell you about those later.

In the late 80's/ early 90's there seemed be a kind of implosion in
underground comics. Knockabout Comics stopped producing their anthology,
Escape and the Fast Fiction distribution came to an end and several new
titles folded after just a few issues. Do you have any thoughts on why this
may have happened?,

I'd reluctantly quit the comics scene by this time, so I don't know. I can only guess that the wave of creativity hit a stony shore still bereft of commercial opportunity -- that would come though.

You're living and working in Tokyo now. What is it exactly that you
do now? Has what you have learnt from your small press ventures helped you
in your present career?

Well, I'm very careful about business partners! I own and run a web-based publishing company here. We run a very large portal site for learners of English in Japan which is advertising funded and provided lots of information about learning English, studying abroad, why Americans are strange, etc. We also publish books, audio books, magazines, podcasts etc. For example we were doing the TIME magazine podcast for Japan here (its on sabbatical right now), which was fun, we have a book out in October with Macmillan which interviews foreign CEOs of multinationals in Japan, this kind of stuff.

Infinity and the other zines taught me about editing, writing, design, working with creative people -- I was rubbish at it when I started (I didn’t even know how to order the pages properly so they’d print right), but learnt on the job and it was very natural for me to feel that I could take on professional projects later on, with that experience behind me. Though I shudder when I look at the wonky, scratched Letraset, bad paste-up and acres of IBM Golfball-generated typos in every issue of Infinity!

Would you ever consider working on an underground comics project
again?
Funny you should mention that! I've just put together Infinity #9 -- with all the articles and letters and some of the artwork that should have been published 23 years ago. It includes front and back covers by the late Steve Whitaker, to whom I've dedicated the issue. I've created it as a private gift for people who read Infinity back then -- "friends of Infinity". If you were a reader, contributor or just knew me back in the day, then drop me an e-mail at russjapan@ mac.com and I'll send you a copy. 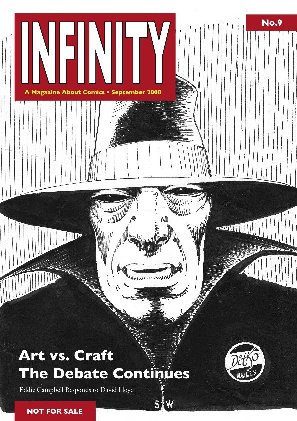 Living and working so far away from home, and for so many years now,
do you often think back to your days working with underground comics in the
early 80s?
I do. It was a wonderful period. I feel so lucky to have been even a small part of it. In the last few years I’ve been confronted with so many things that remind me of those days -- whether it be picking up an Eddie Campbell book and seeing references to Infinity in it or watching the American Splendor film on DVD or just seeing names of people that contributed to Infinity or who I knew from back then as I browse the book section of Tower Records in Tokyo. Great stuff!