Do Not Adjust Your Set
2 Replies

View this post on Instagram Facebook, in I love Water Festival in Cambodia. Pictures from earlier in November: Villages store wooden longboats in their local temple, and bring them out and practice for the big match in the capitol. (There are some regional races too.) We have religious holidays, national holidays. But this is particularly [...]

Australia spent $55 million (USD 38 million) to relocate 5 refugees in Cambodia. Cost effective? You could have put the refugees up at the Hilton, bought them a business and sent their kids to top private schools for these prices. Maybe, just maybe, we could be kind instead.   Australia’s Cambodia Refugee Deal [...]

The Saga Of The Child Temple Vendor [Update]

On social media in the last few weeks, this story has been HUGE: Meet the Incredible Cambodia Boy Who Can Speak Over 10 Languages https://nextshark.com/cambodian-boy-multiple-languages/ “Temple kid speaks many languages! But he’s POOR.” I lived in Siem Reap from year 2000 to 2004. (And was in Tomb Raider before it labeled Ta Prohm the ‘Tomb [...]

[Above: memorial at Wat Teuk Thla, Phnom Penh. It is open to the public.] Steve Gourley (51) has passed. He had been convalescing from head trauma from a moto accident in Phnom Penh in 2017. He had the good fortune to have a good medical cover, and had initially begun recovery in Bangkok. Fluent in [...]

Favorite Music:
Anything I can draw comics to.
http://www.qdcomic.com/music/

View my page on komikazepress

Thinks I Want You Should Know About Cambodia 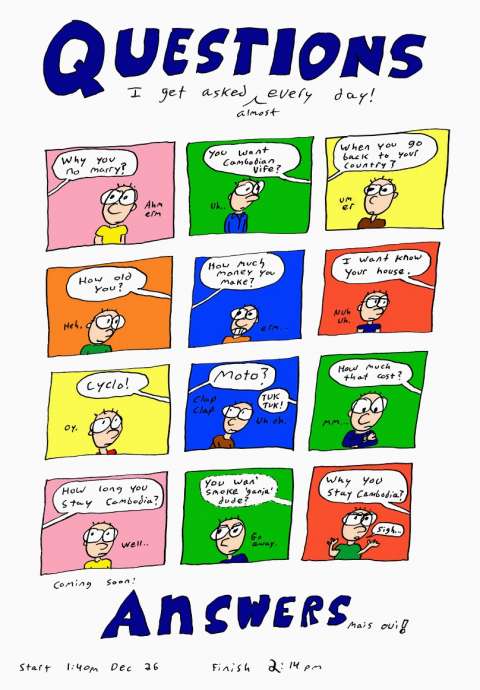 I should caution my Cambodian friends there is some slang in this comic, for fun. (The final panel references a particularly notorious hip hop tune.) And I should caution my Anglophone readers I may use Khmer (Cambodian) words in the images and accompanying text of my comics.  http://www.quickdraw.me  … 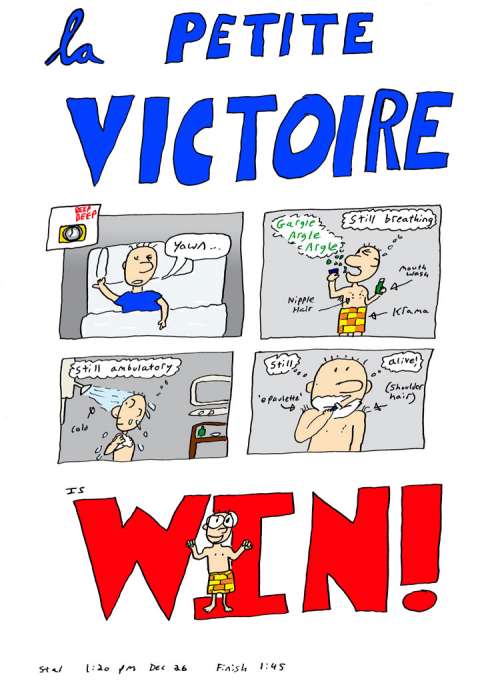 We used a camera as our 'scanner', click for results in PDF format!
(Above: photo courtesy… Continue Miss Helen said…
Hi JW! I think I was exposed to Let's Sing Songs About and Inspired by Quickdraw at a crucial point in my development, and as such, it is stuck in my head on a regular basis, and often rewritten for any circumstance I'm in. I will think of some examples later.

Alice Mrongovius said…
Hey John - hmm I'm kinda liking this - a bit more involving .... hopefully soon I will be able to kill my facebook account.... anway will have a play and get back to you

Tim Molloy said…
thanks john! will do!

shannon wheeler said…
thanks. I'm looking ofrward to the Stumptown con myself. This is the first time I've been involved in organizing. It's an interesting experience.

Nope. No mp3s of the opera for a while. I like that it's a live event. There are a couple short bits up on youtube, but it's pretty minimal.

Kaichi Satake said…
Hi, John! Thanks very much for the welcome. This is a really cool place, and I look forward to spending more time exploring it and having fun!

Leigh Rigozzi said…
Hey John,
Tasmania doesn't have anything else to do, so we just draw comics all day.
Have you got any new comics out? Wanna do a trade?

Andrew Fulton said…
Thanks John, I've been meaning to sign up for a while. Go ahead and add the feed, if you like.

Esbjorn Jorsater said…
Thanks,
Nice site. I´m gonna give a presentation of swedish comics as soon I have the time.

Iris said…
Thanks, John.
I really appreciate the welcome, but please, don't use an automatic translator... here's what to said to me: "good come to Comics Lifestyle!
This is kind of experience, we'll sees what emerges.
I be very happy to see some more international members, I use the website because you likes!"
These automatic things are not very good.
Best wishes,
Iris